1989
The St Thomas Singers were founded.

1990
Although just one year old, the choir began its highly successful participation in the national Sainsbury’s Choir of the Year Competition, eventually reaching the last four out of a field of over three hundred choirs and winning a place in the final. The event was televised by the BBC during February and March 1991

1992
The choir sang in St Giles Cathedral, Edinburgh where its performance of the Victoria Requiem of 1605 was enthusiastically received.

1993
The choir made its first overseas trip when the Singers visited Normandy in the summer. Engagements included a pre-mass recital and sung mass for Whit Sunday in the Abbaye-aux-Hommes in Caen as well as recitals in Coutances Cathedral, the Joan of Arc church in Rouen and St Mary’s Basilica in Bonsecours. The choir sang to great acclaim, receiving standing ovations in Caen and Rouen.
The choir also issued its first recording, a cassette of Christmas carols recorded in Newcastle’s historic All Saints Church. 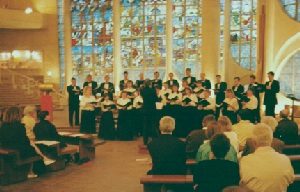 The Singers performing in the Jean D’Arc Church in Rouen

1994
The choir made a return visit to St Giles Cathedral, Edinburgh when the programme consisted of Latin choral music by Mendelssohn and the Magnificat and Nunc Dimittis Collegium Regale by John Tavener.

1995
The choir produced its first CD recording Carols from the Quayside – a further collection of carols recorded in All Saints Church on Newcastle’s historic quayside.
The 300th anniversary of Henry Purcell was celebrated in St Thomas’ by a joint concert with the Carolinian Consort from London.

1996
The Singers celebrate the restoration of the clock in the tower of St Thomas’ with a special concert around the theme of ‘time’, and makes its first visit to Durham to sing in the beautiful chapel of Ushaw College. The Singers made their last appearance in St Thomas’ Church at the Advent Carol Service.

1997
The Singers participate in the first Newcastle Early Music Festival and present another joint concert with the Carolinian Consort in the Singers’ new rehearsal home, Holy Trinity Church. The Singers also travel to Shipley for a concert in St Paul’s Church. However, for many the highlight of the year will be singing Compline by candlelight with the Bishop of Durham in the Chapel of Bishop Auckland Castle.

1998
The year started with the St Thomas Singers singing for the Epiphany High Mass in Durham Cathedral. The setting was the Missa Beati Omnes by Gombert. Later in the year the Singers recorded a number of items for Tyne Tees Television which were broadcast in a series of religious programmes on television.

1999
The year started with the Singers again singing for the Epiphany High Mass in Durham Cathedral. The choir sang the mass and motet O magnum mysterium by Victoria. The choir gave a very successful concert in St Giles Cathedral in the summer, and this was followed later in the year by concerts in the Kings Hall, University of Newcastle and in Shipley.

2001
Again, the year started with Epiphany High Mass in Durham Cathedral with Magnus Williamson as our organist. In October we made another visit to St Giles Cathedral in Edinburgh where our programme included three motets by Villette and the Tippett spirituals. We sang at four Christmas concerts with the English Philharmonic Orchestra. These were in Carlisle, Hexham, Berwick and Newcastle. We sang extracts from Messiah, a cantata by Buxtehude and a selection of carols.